Twenty Down Four to go

This weeks challenge at Through the Purple Haze the challenge is to use your stash. I have boxes and boxes of bits and pieces that I have collected through the years and in one such box there are loads of chipboard shapes I bought them because they were at a ridiculous price but have always struggled to use them on my cards as they are just a wee bit too big for a card embellishment. So I decided to make the effort to use some of them up for this project. 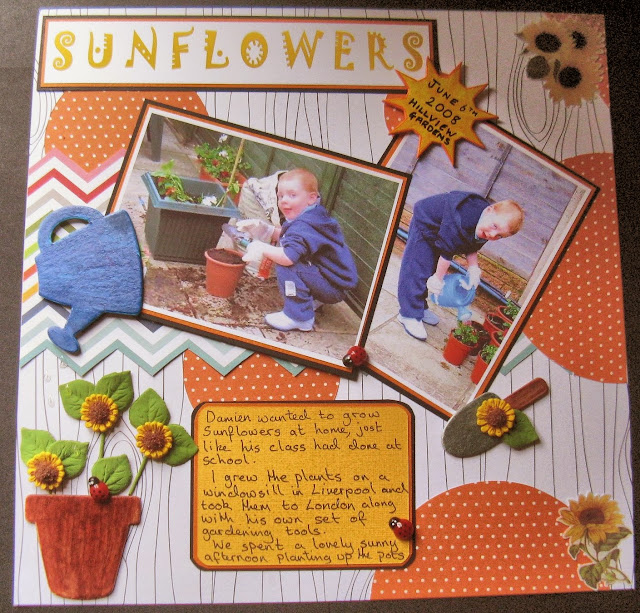 I have had these two super shots of my eldest grandson aged 4 languishing on a memory stick for five years. However I am now making a conscious effort to start scrapbooking and I knew these would work perfectly with the large garden themed chipboard shapes I had.  The previous year at his nursery school the class had grown sunflowers and he had loved it. However on finding himself in proper school the class were not growing them, so knowing I had some seeds in my garden shed I offered to grow some plants and promised to go down once they were big enough so that he could plant them in the garden for Mummy. On the way to London we popped into a garden centre and bought some pots and a gardening set for him as well as some smaller Bizzie Lizze plants for him to put in the post with the sunflowers as a centre piece. He was a little impatient at first and wanted to put the plants in the pots as soon as the first few trowels full of earth had been put in but with guidance he really got the hang of it including the need to sweep all the mess up after we had finished planting.

I used a 12x12 sheet of paper from American Crafts project life Midnight set as a backing and the zigzag paper and was a strip I had left from another page done using a backing paper from the Honey set. the orange circles were cut using a circle cutter from left overs from some Bazill papers I had and I managed to find some orange card stock that matched in my scraps box for matting and layering the photos. I had some Sunflower resin stickers in my stash as well as some flowers and leaves I had made up from Martha Stewart paper clay for a previous project and then not used. The lady birds were a freebie from a card making magazine and have sat in a box for a couple of years. The vibrant journalling card is again from the Honey set by American Life. The title strip is computer generated and then matted onto orange and black card stock. 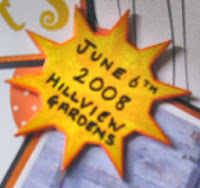 The plant pot, watering can, trowel, and sun were all from the box of chipboard shapes and I painted them with gesso before colouring with promarkers. As a finishing touch I added Glossy accent water droplets coming from the watering can and on two of the Leaves.

I am entering this project in to
http://throughthepurplehazechallenges.blogspot.co.uk/ - Use your stash.