Eighteen Down Six to go

This week at Through the Purple Haze the challenge is to include winter scene with an option of including animals or people. 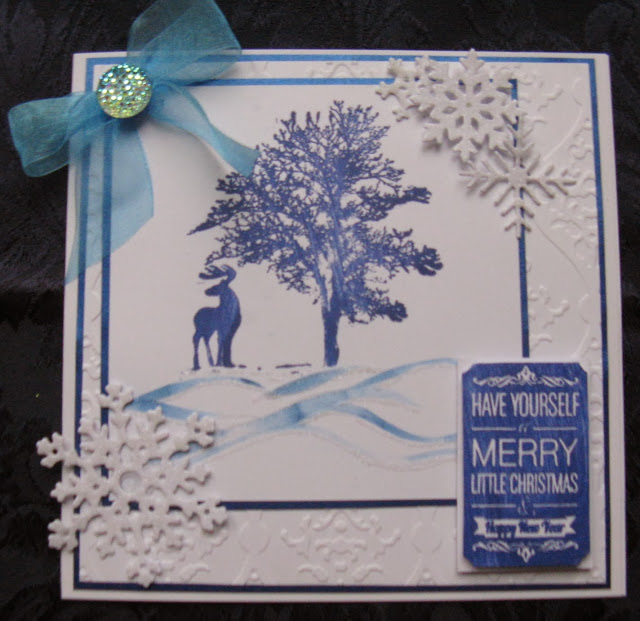 I started by creating my snow lines on white card using a couple of bits of copier paper torn to make masks and then positioned them with a small gap between and used Versafine 'deep lagoon' to ink through the gap. I then used Versafine Majestic Blue to ink up the Stag Cliff Hanger stamp from Indigo Blu and then masked off the cliff to Leave just the stag and the tree which I stamped in position on my panel. I finished the panel off using a quickie glue pen to underline the snow lines and add rangers crystal distress glitter, and left the panel to dry.

I made the sentiment by masking off the stag and tree and just stamping the cliff part of the stamp and cutting out the greeting section which was mounted on to plain white card stock using foam pads.

I embossed a five and half inch square of white card using the embossing folder that comes free with the ebosser and then mounted this onto royal blue Centura Pearl paper and stuck it to the front of a 6x6 card blank.

The snowflakes were cut from scraps of white card using a Tattered Lace Snowflakes die and then I added more of the distress glitter using a glue pen and left them to dry.

I matted the stag panel onto royal blue Centura Pearl paper and trimmed it to leave a narrow border and stuck it to the card blank off set from the centre then added the greeting and the snowflakes. The finishing touch was a bow tied in organza ribbon and finished with a large gem stone centre.