S is for Steampunk

I have been trying to come up with an idea for my Brother-in-laws birthday card for a few days with no luck then yesterday whilst looking for something else entirely I came across a topper. It was an odd one I had left from a set by Kanban and I had a piece of patterned paper from their Alchemy paper pad left in my stash. Andrew used to ride motorbikes and even built his own trike but had to trade it in for a car when his family came along so the topper was perfect.

The piece of patterned paper also worked really well for him as he lives in London. 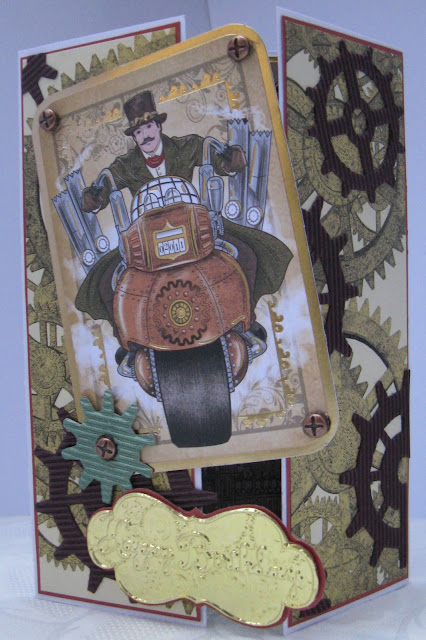 However one piece of paper and a topper do not a card make. I used a CD Rom from Crafty Catz called  'A Touch of Steampunk' to supplement the papers. I printed them onto pearlised paper so that they had a metallic feel to them. Once I had done this I decided that they would work well on the outside of the card

I made an A5 gatefold card blank from plain white card and then added panels of the paper from the CD which I mounted onto dark red Centura Pearl card, and trimmed to leave a narrow border. Then stuck these panels to either side of the card front. 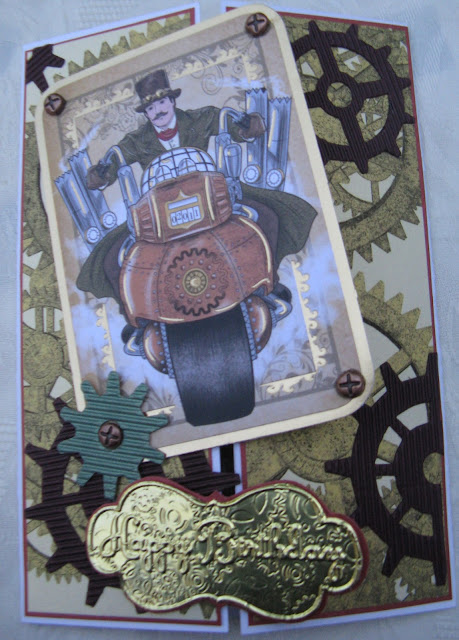 I added some die cut cogs to the front of the card and then added the topper at an angle. I made my own embossed metal greeting panel  by embossing a piece of metal carft foil using the Papermania cogs triboss folder and then I embossed it again using a sizzix happy birthday folder. I cut it out and mounted it onto the dark red card and then trimmed to leave a border before sticking it to the front of the card. The screws are metal brads from the Papermania Chronology range I snipped the legs off and stuck one in each corner of the topper with gel glue. inside the  card I used the Kanban patterned paper for the centre panel, which had been mounted on gold  mirri and then I cut a central frame from the panel - I cut a gold frame from mirri which had been embossed with the Cogs embossing folder in the Tim Holtz range. I added two cogs to decorate the frame and then added two panels of paper from the CD mounted on the dark red card before finishing with more cogs down the left hand panel. So that's all the family birthdays sorted now until November when everything goes a bit silly with, my Hubby, two brother-in-laws and a grandson all celebrating birthdays and two family wedding anniversaries to make cards for all in the space of the first 3 weeks in November.