This week over at Fab 'n' Funky challenges it is all about animals. I had this wonderfully cute  digi image from Stamp Art by Kathryne over at Whimsy Stamps. 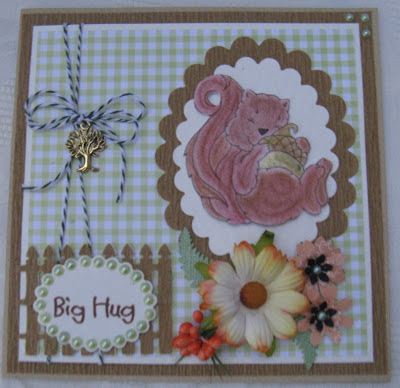 Called 'Big Hug' he comes with his own sentiment which for my design I cropped off the image and then printed out just the sentiment onto cream card to die cut and add later.

I used Kraft card and a lovely Kraft paper I had recently bought and not played with it has a lovely texture almost like tree bark but really fine so it worked better than embossing brown card in my bark embossing folder which was a bit large for the size of the design as I was working on a 6x6 card.

I covered the card blank with the paper and then added a panel of pale green gingham card which had been mounted onto cream card and trimmed to leave a narrow border. 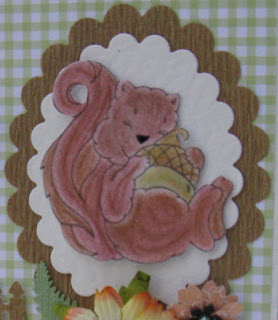 I coloured the image using chalks, and once I had finished I sprayed the surface with hairspray to seal the colour, I know you can buy all sorts of fancy fixatives out there but I have found the best thing is really cheap hairspray ( I am currently using an own brand budget one from a well known supermarket  it cost 39 pence for a large can and has the bonus of smelling reasonably pleasant as well)
Once the image was fixed I fussy cut him out and then mounted him onto a die cut background made using nestabilities scalloped ovals and  I cut one from the Kraft paper and one from cream card and layered them up. I also added a thin layer of dries clear PVA to the 'nut' part of the acorn to give the sheen that acorns have.

He was then stuck to the right of the card

I had tied some bakers twine round the gingham panel before sticking it down and added a little brass tree charm.

I die cut the sentiment using the scalloped oval die and mounted this onto a little panel that I had made by dieicutting a picket fence from card which had had the Kraft paper stuck to it, using a cottage cutz mini die.

I finished off with a few flowers and berries and also added some lovely pale green pearls round the sentiment and in the top corner of the card.