So many of the cards in the recycling project depicted Santa that it was difficult to know where to start when choosing one to create a card for CraftyHazelnuts Christmas Challenge blog this week. However when I came across this image I just knew he would lend himself to a bit of vintage styling. 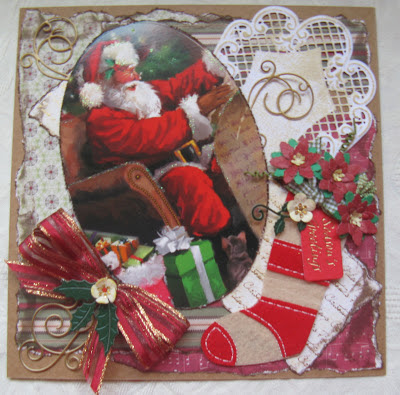 I used Kraft card as a base because I feel that this grabs the vintage look immediately, apart from the ribbon and the greeting tag everything else is from the bits box and is left over from previous projects. The paper lace frame is the first one I ever cut with the Anja Oval die from Marianne and I ripped the bottom part getting it out of the die. I managed to cover the rip with the layers of paper and the image. The felt stocking was something else from the recycling bag and I added the die cut flowers which were all cut from scraps of paper and card. They are a bit fiddly to cut especially the centres but I am really pleased with the way they have turned out. I make them up in batches and just use them as I need them now.

So I will leave Santa checking his list to see who has been naughty or nice and enter this card into the following challenges.