.....to carrots. Well this little fellow certainly does he's kicked all his carrots out of his secret hiding place in favour of yummy chocolate Easter eggs. 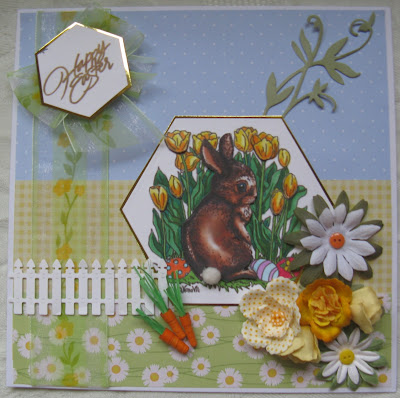 I used Spectrum Noir markers to colour the background. I then die cut the image using sizzix hexagon dies and used a smaller die to cut the greeting, these were then backed with gold mirror card which I trimmed by hand to leave a narrow border.

The papers were a freebie from a magazine and I overlapped the strips to form a square and then wrapped one edge with a pretty printed organza ribbon I had in my stash, before fixing the panel to an 8x8 card blank.
I added a bow at the top of the ribbon and stuck the sentiment to the centre of the bow.

The White fence was cut from plain white card using the small picket fence die from cottage cutz. I added the bunny image and put a die cut made using a Marianne leaves die behind it. 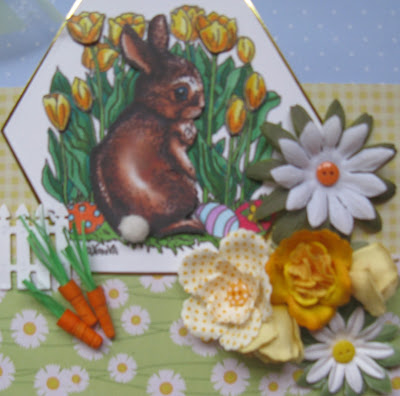 The flowers were an assortment from my stash including fabric daisies from Petaloo they were originally all white but I coloured some of them green to form leaves. I added mini buttons from Papermania as the flower centres. The finishing touch were the bunnies now discarded carrots made by quilling three coils from orange paper and pushing them out to form the carrot shape before adding the leaves which were small sections of a green quilling strip that I had snipped to form thing leaves.