Welcome to the world Lily Rose

When I returned home from work on Monday evening I received a message to tell me that my friend Vicky had gone into labour slightly earlier than expected and that the new arrival was imminent. Lily-Rose arrived in the world at 01:23 hours on Tuesday 12th of June 2012 weighing in at 5lbs 15 1/2 ounces.  Although Vicky knew she was expecting a little girl she hadn't told anyone else so I had two cards planned in my head and two sets of stash on standby to go as soon as I found out. So at approximately 09:30 hrs on 12th June 2012 I went into labour with this card (I think I probably had a much easier time of it than Vicky, although it did last nearly as long.) 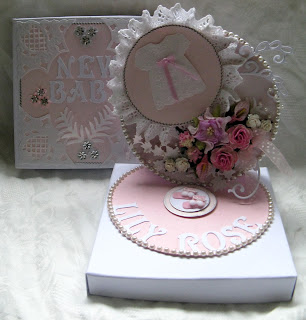 I started with the box to make sure that the corners were dry and solid before I decorated it. I used a glitter girls box making board to get the measurements right and secured the corners with gel glue holding them together with clothes pegs until the glue was dry.

The next thing I did was get the big shot out of it's storage bag and start die cutting. I used a number of different dies including, Nestabilities circles, two different flourishes, Anja corners and the ivy leaves from Marianne Creatables, fern leaf die from Kreassions, and finally the letter die is from X-cut.

I then moved onto making the base card and the topper. The base card started life as a 6x6 square card and I used the largest of my x-cut circle cutters to cut it to shape. Because I knew the embellishments would be quite weighty I then cut a piece of plain pink card and a piece of pink card I bought ages ago and can't remember where from but it is embossed with tiny little footprints. I sandwiched the bottom of the base card between these two circles and secured with glue gel ensuring that the embossed piece would be uppermost when the card was opened. This was then left to dry whilst I returned to the box lid which was by now dry enough to work with. 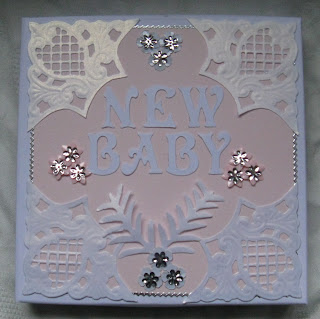 I cut a square of pink card and stuck this to the lid and added silver peel off round the edge and the Anja corners which had been which had been cut from white pearl paper. The flowers were made by layering up different size sequins from my stash, and the letters were stuck down using glue gel to allow me to get them lined up. Whilst this was drying I returned to the card. 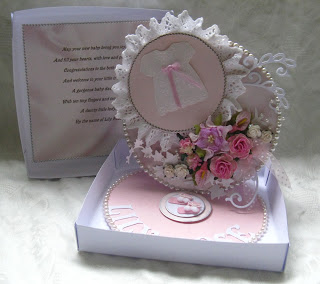 I folded the front of the card to form the easel and used a piece of pink card stock as the front panel. I covered this with a beautiful paper from Ooh La La's Passion for Fashion CD which looks like a piece of satin and to enhance the effect it was printed on pearlised paper. I used two circles for the topper, sandwiching white crocheted lace between the two to give a fancy edge. The little dress is cut from vellum and I then used an embossing grid to add little flowers to it, before attaching to piece of white paper and then  sticking it to the centre of the topper. the tiny ribbon bow was then added to finish (Thank goodness for my bow maker I could never have tied it that small without it). Whilst the topper was drying I added the self adhesive pearls around the edges of the card and base. I put the letters spelling Lily-Rose around the front edge of the card, and added the tiny bootees I found in my stash onto a circle of card stock to make the stopper. 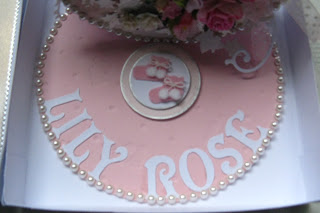 Once the topper was dry I added a floral arrangement, using roses from Wild Orchid crafts and lilies from my stash.

To finish off I printed a verse on a sheet of the paper from the Ooh La La CD and stuck this to the inside of the lid. 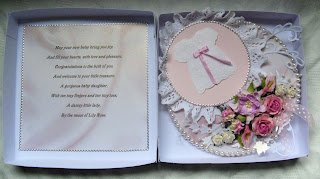 May your new baby bring you joy
And fill your hearts with love and pleasure
Congratulations to the both of you
And welcome to your little treasure.
A gorgeous baby daughter
With ten tiny fingers and ten tiny toes.
A dainty little lady
By the name of Lily Rose.

The card will be delivered tomorrow.