Well it's Monday and therefore time for a new challenge at http://ooh-la-la-creationschallenges.blogspot.com/. This time the challenge is all about new beginnings and I would like to start by thanking the team at Ooh La La creations for giving me the opportunity to join them for six months as a DT member and have my own new beginning.

There were over 180 entries in the last challenge anything but a card and because the winner is not chosen randomly but by members of the DT who take it in turn to pick the winners it was a huge task checking all the entries and there were so many wonderful projects I'm just glad it wasn't my turn to pick the winner, as it was really difficult for me to pick a favourite
.
Anyway onto my first card as a member of the team and I have to say there are some fantastic designs from the DT this week for several different 'New Beginnings' so do check them out. 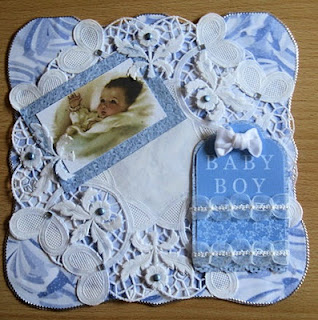 As my new beginning I chose the arrival of a new baby, I used a mixture of elements from Ooh La La CD's and it just goes to show that the possibilities are endless as the designs will work well across a range of CD's as well as from the self contained elements available on each one.

Materials
papers and topper from the Kidiwinks CD from Ooh La La
Tag from the Fleur d'Imagination
The doilies used were from my stash as were the brads and gems.

Method
I started by printing off the papers, topper and tag, I used a HP deskjet 1000 printer and white 100gsm paper with a normal print setting for the papers and 120gsm cardstock on photo setting for the tags.
I used the shaped card blank as a template to cut the backing paper and trimmed a doily to fit over the backing as a base for the card. The topper had it's own frame but I cropped this before printing the image and mounted it on blue backing paper. The tag was wrapped with two pieces of organza ribbon and mounted on blue backing paper that had been shaped on the bottom edge using a Martha Stewart punch and I added a satin bow to the top before sticking it to the card.

I used a second doily which I trimmed using decoupage scissors to get the flower and leaf motifs and these were then overlaid on the background doily before the flower centres were highlighted with the brads and the gems added.

I really enjoyed working with the fabulous images on the CD and am looking forward to using them much more in the weeks to come.

Finally all that remains is for me to wish you luck in entering the challenge at  http://ooh-la-la-creationschallenges.blogspot.com/. I am looking forward to seeing all the entries.

I am entering this card into the challenges at
http://craftycatzweeklychallenge.blogspot.com - A new beginning
http://fabnfunkychallenges.blogspot.com/ - Something New - the Ooh La La products are New to me
Posted by Alli Devine at 09:00