Something my husband and I have been doing for the last twenty two years since we first met as work colleagues. So when I came across this sentiment in my stash during a sort out last week I just knew it had to be incorporated into a wedding card. I had a search around a few blogs and found this wonderful inspirational photograph at http://foryourinspirationchallenges.blogspot.com 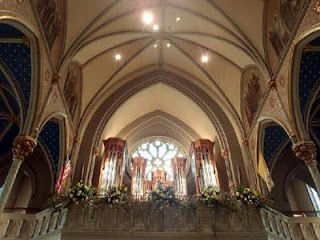 I felt that this would work well as the basis of inspiration for my card so here is what I came up with. 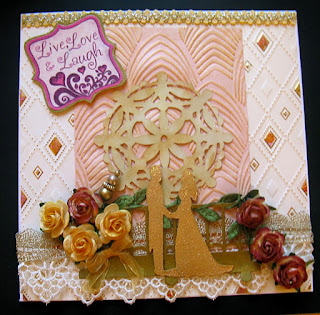 I found the backing paper lurking in my stash and it appears to have been one of those impulse purchases that I knew at the time would come in useful.
The sentiment is from the Kaisercraft Gypsy sisters range as is the peach panel which was embossed using an embossing folder from Coture creations called Victorian plumes but I thought the pattern reflected the arches in the photograph, to add a bit of glamour it has been highlighted by dabbing with a Dewdrop Brilliance - Galaxy Gold inkpad,

I knew I wanted a doily in the design to emulate that magnificent rose window in the picture and this one was cut using my e-craft which was a present from Santa (well my dad actually) once I had cut the shape I used antique linen distress ink from Tim Holtz to age it a bit.

The Cream and gold lace ribbons were in my stash but I know originally the cram ne came from Wild Orchid Crafts as did the flowers, which I 'glammed' up by edging with gold pearl paint following a tutorial I had watched on the Wild Orchid website Thank folks.

I knew from the start of the design I wanted to include a balcony and in the absence of a balcony die I used a Marianne bid cage die to cut two birdcages from gold card which I then snipped the tops off and used the bottom half only to form the balcony behind the bride and groom, the leaves are actually part of a length of ribbon that I rescued from being thrown in the rubbish and were originally part of a head band. 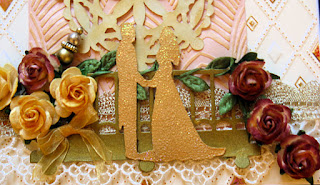 I was in a bit of a 'pickle' when it came to my bride and groom I had found the die cut in my stash but it was silver so the dew drop brilliance ink pad was employed with a liberal sprinkling of gold embossing powder to create the 'Midas touch' and turn them to gold.

I hope you like it and thanks for dropping by and reading my blog.