The Magic of Christmas

As part of my charity card project I have looked through hundreds of Christmas cards and many have already had sections cut from them with various shaped dies to be recycled into new cards. When I came across this one in the pile I couldn't bring myself to cut it. I loved the sentiment and the image together as they were so I trimmed it and to transform it I used some of my stash. I have already decided that some of the cards will be given directly to charity shops to sell, but we have a number of local charities who don't have the luxury of a charity shop to help raise funds so having discussed this with work colleagues some of the more elaborate cards will be put on sale at work and the cash raised will be donated to the charities. I have requested that my colleagues come up with suggestions for charities they would like to see supported so that we can spread the magic of Christmas to as many as possible throughout the year. 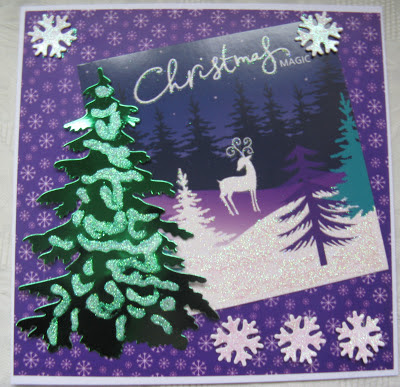 I used some dark purple snowflake vellum from my stash I bought  it years ago in a sale and have never had a suitable project for it. The recycled card image was just trimmed to get rid of any rough edges and stuck on the background at an angle before a die cut pine tree cut from green foil card and glittered randomly using stickles iridescent glitter glue was added and the whole thing was finished off with the glittered snowflakes. I added some extra glitter to the carpet of snow on the image using the glitter glue to make it really sparkle.