I don't usually go for the whole Halloween thing, due mainly to it not being something that has any roots in my childhood. However a few nights ago I was making a Christmas card and using some die cut corners which I had cut using a Cherry Lynn die, called holly corners. I was suddenly struck with an idea that if I turned the corners upside down and made a few well placed snips with scissors I could create a bat. This lead me to search my stash for suitable items to create a Halloween Card so I could use my bats and here is what I came up with. 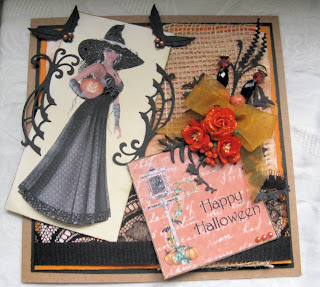 Method.
I resized the image of the Witch from the ATC folder and cropped off the happy Halloween greeting down the side, I also resized the Happy Halloween sentiment. The backing paper was from the flights of fancy folder on the Femme Fatale CD and by opening it in my craft studio I was able to adjust the colour to fit this project. I printed 2 copies of the topper and 1 sentiment onto white card. If you haven't come across Ooh La La CDs before then you can find the full range here . They are really versatile and can be used stand alone or in a graphics programme as I have on this project and they contain some stunning images and backing papers.

To give the card some extra depth I fussy cut one image of the Witch from the topper and using scissors to gently curve the skirt I glued this over the image on the other topper using glue gel. I then added some spots of PVA using a microfine tip to her hat the hem of the dress and the corset area of the dress before sprinkling with ultrafine black glitter. This was left t one side to dry.

I then cut the Black card, orange card and backing paper to size to leave a thin border of the base card showing.

I die cut a selection of leaves using the dies listed above from black card. To allow the topper to dry fully I made up 2 jewel pins using a selection of beads from my stash, which have been collected from various charity shop buys of old jewellery. I used 2 long Jewellers pins with decorative flower finials and coated the pin in glue gel ( by sticking it into the end of the tube) and the slid the beads into place. I wiped the end of the pin which was left exposed and left these to dry.

I roughed the edge of the topper using scissors and rubbed this onto the gold stamp pad, I also did the same with sentiment. I stuck the topper onto the card using glue gel and added the flourishes either side, before adding the sentiment. 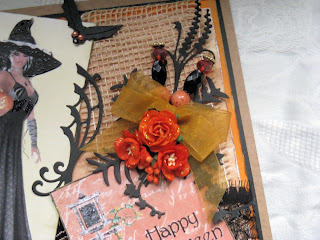 I tied a double bow in the organza ribbon and having played with the various leaves diecuts stuck the leave to the card with the bow over the top of the join. I then added the orange flowers and berries and whilst the glue gel I had used to hold the flowers and bow in place was still wet I pushed the jewelled pins in at an angle. 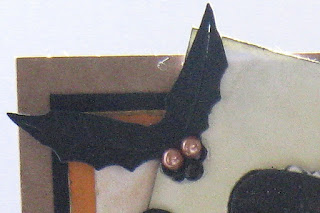 The bats were made by snipping off the centre of the three holly leaves and the flourish from the holly corners die cut. I also flattened the top edge of the remaining 2 leaves snipping off the holly points, These were then turned upside down and the orange gems added for eyes and a black crystal gem for the nose. 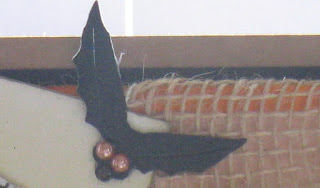 The final touch was a line of three of the orange pearls on the bottom corner of the sentiment.