As regular readers of my blog will know I lost my Mum back in 2009. She always really encouraged my card making and when I brought some peel off verses recently there was one dedicated to 'Mother' in there. I decoded to make a Mother's card with it and decided to do one that I just know my Mum would have loved. here is the result 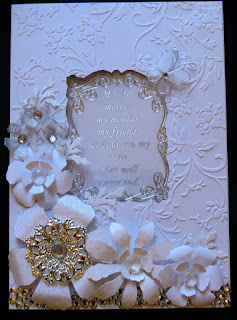 I started by sticking the peel off verse to a piece of white card and cutting round the border using decoupage snips I then used this as a template to draw and cut an aperture in a piece of A4 card which I then embossed using a flowers and swirls embossing folder from cArt.Us. Using the sentiment as a template again I found the centre of the front of an A5 card blank and cut a rectangular aperture slightly larger than the sentiment. Once this was done I turned my attention to the inside of the card and lined the inside with some beautiful Swedish Paper from the Vive Gade range I covered both the inside front and back and then working from the front of the card cut away the excess paper leaving a narrow border that could be folded through the rectangular aperture to give a neat finish. I then highlighted the corners of the aperture using just the corners from a Marianne frame die and adhered the sentiment panel to the inside back of the card to line up with the aperture as shown below. 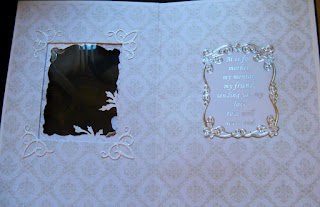 I cut a rectangle of acetate slightly larger than the aperture which I stuck to the front of the card and then stuck the embossed panel over the front. 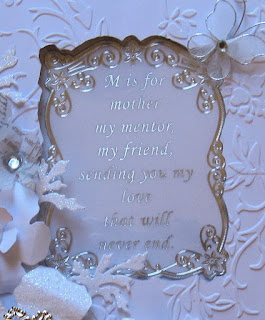 The embellishments were made from off cuts of white paper, white glitter paper and white velum with a silver script design, using a Tim Holtz tattered flowers die. I layered these up and added acrylic crystals as centres, all apart from the largest flower where I used a metallic and crystal flower as the centre. I used a Mariane die to cut some leaves from the scraps of white glitter paper I had left.

Using self adhesive clear crystals I ran a border along the bottom edge of the card, before arranging the flowers and leaves I allowed the leaves to over lap the acetate panel so they can bee seen when the card is opened.

I finished it off with a little net butterfly - on one of the very few visits my Mum ever made to a craft shop with me she spotted the butterflies and fell in love with them so whenever I see them on other peoples projects or use one on my own it reminds me of Mum.

The process of making this card was really calming and although I can't give it to my Mum I think she would have liked it.