Having been an avid card maker for over two years I decided to enrol with the Craft Qualification Centre to complete a certificate in paper craft, the qualification consists of two compulsory modules and two further modules from a choice of four different areas. I decided to undertake the card making module and the scrap booking module. I haven't done any scrap booking before unless you count the couple of hundred cuttings books full of newspaper and magazine cuttings relating to The Beatles that cover a period from the early sixties to date, which aren't really what most crafters mean when they refer to scrap booking.

I have recently completed the first module and thanks to a fellow student on the course who did warn me scrap booking can become addictive I was pointed in the direction of some scrapping blogs via her own blog.

I had a look for challenges out there and found one at http://thepapervariety.blogspot.com/ that I thought I could have a go at without too much difficulty. The challenge for this week was to use a grid pattern and /or all the colours of the rainbow.

In 2008 a friend and I attended the Chelsea Flower Show to see 'The Garden For Life' a tribute garden to the life of George Harrison designed by his widow Olivia and long time friend of the Harrison Family Yvonne Innes. The brief was to represent George's life in the design of the garden. A wonderful mosaic rainbow path wound through planting that covered everything from his helping his dad look after the veg patch on the allotment when he was a child in Liverpool through the colour explosion, and chaos that was the 1960s to the calmer greens and whites of his spiritual nature in later life. When we saw the garden we were so impressed that the brief had been captured perfectly and were delighted when on the afternoon of our visit we were able to speak to both designers about the design and the reason the plants had been chosen. It was a very special day and I took almost two hundred photographs of the garden that I have on a CD.

When I read the challenge at paper variety those pictures immediately sprang to mind, in themselves they contained every colour of the rainbow so I set to work editing the photos to provide different sizes for my grid layout. 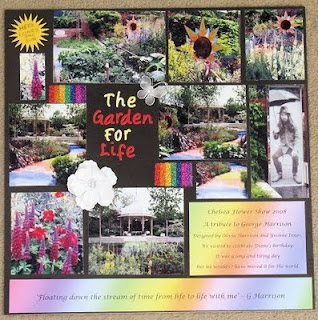 The strip of rainbow paper across the bottom of the design is a quote from one of George's songs and this quote was etched into the white marble that formed the side of the water rill in the garden.

I used some Papermania glitter strips and double sided tape to form the two rainbow strips, and used a paper flower and mesh butterfly out of my stash to add interest. Finally I added a foam sun shape with Here Comes The Sun written on it to mimic the gorgeous glass sculpture that was the centre piece of the garden. 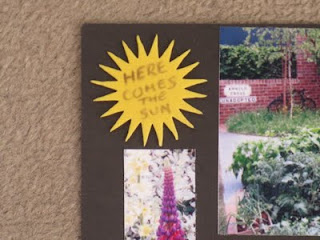 Please feel free to leave feedback as I said I have never done a scrap book layout before and am eager to learn and improve, as my fellow student said it's addictive.

I have already started planning the next layout which depicts the other woman in the life of my husband - she's a bit old now being born in 1938 but she still has all her own chrome work and is fully road worthy. Yes you may have guessed, she is his historic car, her name is Guilia and she will be featuring in a blog post soon.
Posted by Alli Devine at 17:35