Once again we had some wonderful entries for our last challenge and Dawn had a really difficult job selecting the top three - you can pop over to the challenge blog to see her choices. So this week it is Lorraine's turn to chose the theme for the next fortnight at the Ooh La La Creations Challenge blog. She has come up with Ebony and Ivory - and apart from the fact it has resulted in me singing the flippin' song in my head all day it also inspired me to come up with this really simple easel card. 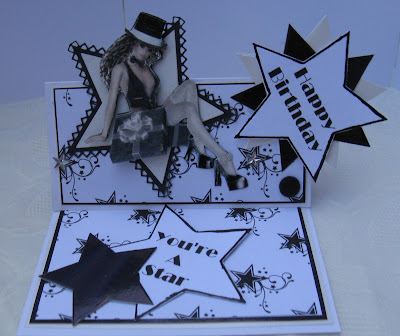 I started with a 6x6 card blank and folded the front in half to form the easel. I then cut two panels of backing paper which was mounted onto black card and these were stuck to the two halves if the front of the card keeping the fold line clear.  I used the same backing paper on the inside of the card and layered this onto black holographic card and white mirror card before sticking to the base of the card.

By adding the extra layers of card to the backing paper it weights the front of the card so that it doesn't  tip over when the easel is opened.

I decoupaged the image from the CD, I stuck the base layer to black card and then cut all the way round her before adding the layers of the waistcoat, top hat and gift. I also printed another base layer which I cut using a Marianne star die, I then layered it onto a star cut using the largest dies in the set and used this as a guide for positioning the decoupage figure with her legs and head outside the star outline.

Once happy with this I stuck her to the easel making sure that she would sit above the line of the fold when the card was opened.

I printed the two greetings and die cut these and several other stars using the same dies set. The Happy birthday was layered onto a black holographic and a white mirror card star with each one at a slightly different angle and these were then stuck to the side of the card.

The other greeting was stuck to the base of the card as a stopper for the easel and a further star cut from black holographic card was layered over this. 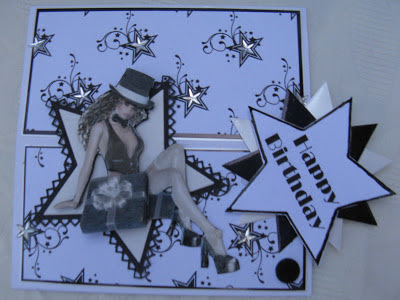 To finish off I added clear star shaped gems to the front of the card and added a black velvet brad.