I have recently been asked to make a number of Fathers Day cards for a friend at work and here is one of the designs I came up with. 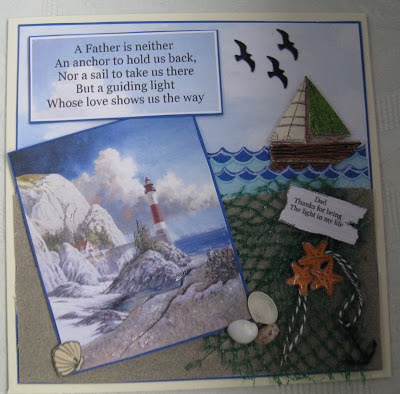 I actually started from the wording on the sentiment, which I found on sheet of rub off sentiments which I have had in my stash for so long I forgot about them until a recent tidy up. This sort of set the theme as being seaside and sailing. I used the image of a lovely light house from Ooh La La Creations Boys to Men CD and I printed it off several times so that I could cut and layer the foreground up to add dimension. I also coated the areas of water with glossy accents to give a shine to the image.

For the background I used a tag from the Boys to Men CD and resized it in My Craft Studio to give an 8x8 cloud background. I also printed a smaller version of the tag and added the sentiment to this. Once I stuck this onto dark blue card I matted and layered fine sand paper over the bottom half to make a beach 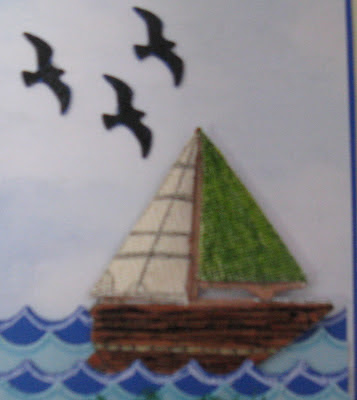 The waves were seagulls and an anchor were cut from scraps of card using x-cut build a scene dies.

The sailing ship was stamped using one of the new stamps from Papermania in the Ahoy There range. I fussy cut it and coloured it with promarkers and added black lines with a fine liner to give teh appearance of wood grain. The sails were actually stamped onto scraps of printable canvas from another project, and the sail was coloured green. 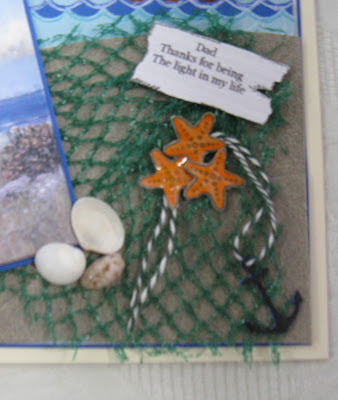 The 'fishing net' is a scrap of a net bag that once held cooking tomatoes ( I have a thing about recycling these net bags from fruit and veg as any regular readers will know and now even have my dad saving them for me) I stamped the star fish using a Kars stamp and coloured these with promarkers and added glossy accents. The 'drift wood sign' was printed onto a lovely white wood grain paper from the latest CD from Ooh La La - faithful friends and the the sign was stamped round it using another of the Ahoy There stamps from Papermania and was then fussy cut.

The finishing touches were the anchor which was threaded with bakers twine and three tiny sea shells that a friend's mum gave me because she thought they may come in useful for my card making. 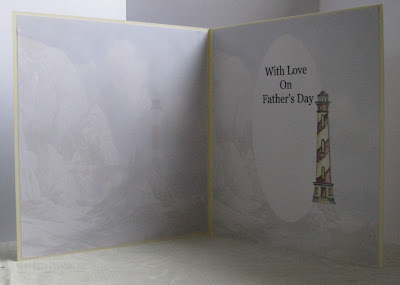 I finished the card off by resizing the light house image from the front to 8x8 and then reducing the opacity of the image before printing. One side had a oval added using the digital punch function on My Craft Studio and a sentiment added. the final element was a light house cut from a design on the Ooh La La Creations CD Everyday Ocassions, which was placed at the edge of the oval to replace the original light house on the image which was partially obscured by the oval.