I have been asked by my manager at work to  make card for a colleague who is leaving. I wanted something pretty and feminine and didn't want to go down the sorry you're leaving route. I had a hunt through my CD roms and came across one which had come free with a magazine and is titled My Craft Studio a little bit of everything.

I didn't use the toppers on the CD just the backing papers and added lots of embellishments. 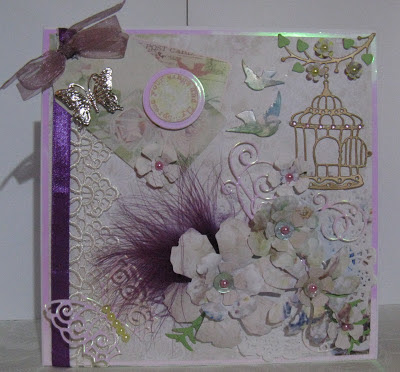 I mounted the backing paper onto a lovely pearly white card from hunkydory which is holographic and it has a pink hue to it, I wrapped this with lace and the dark purple ribbon and then stuck it to an 8x8 base card. One of the tags in the top left was one I had left over in my stash from a pack by Melissa Frances and the other one is a freebie from a lets make cards kit which I bought purely for the Paris themed papers in it so this was a left over.

I die cut two flourishes and a butterfly from the left over piece of the hunkydory card using a memory box die and a creative expressions die respectively. The bird cage is also a creative impressions die and I cut it twice using the matt copper card, and green paper I then snipped the leaves from the green die cut and stuck these down over the copper leaves. I also added 3 punched flower blossoms.
Having put a doily in the bottom right hand corner I set to work cutting the flowers using a s Szzix Tim Holtz Tattered flowers die and the trimmings from the backing paper and the papers inside the card. I then built up the flowers until I had what I wanted adding mother of pearl buttons and flat backed pearls for the centres. Once I had an arrangement I was happy with I stuck them down using pinflair glue gel and also pushed some fern leaves cut using a Kreate die and the purple feather into the back of the arrangement.

The sentiment says 'Spread your wings and fly' and this was mounted on a disc of the backing card cut using a nestie plain circle die. I stuck this over the tags and added a metallic butterfly from my stash and another small 'tattered' flower. I then tied the top tag to the card using dusky lilac organza ribbon. The die cut butterfly had a body added using flat back pearls and the finishing touches was a line of tiny pink gems along the roof of the birdcage and the two tiny birds. 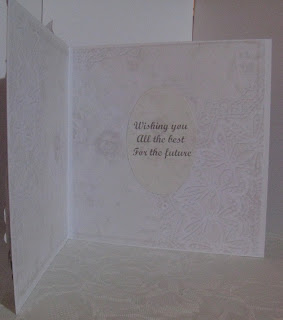 I lined the inside of the card with more of the backing paper and added a die cut panel with a message.