Well in all honesty it is sleeting where I am but the snowy weather seems to have influenced my card making over the past few days. In my recycling project to create cards for charity out of the cards colleagues would normally throw away I have been busy since my last post and here is one I am particularly pleased with. 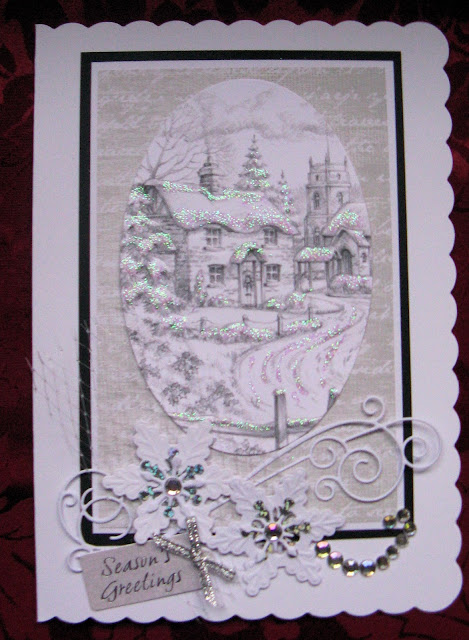 Made entirely from scraps left over from other projects, recycled elements or freebies with exception of the base card, little greetings tag and the glitter. The backing paper is one from a collection by Swedish designer Vive Gade, and was left over from a Valentines day card I had made for a customer. I matted this onto an off cut of white card and trimmed to leave a narrow edge and then matted this onto an offcut of black card before mounting the panel onto a base card.

The image was cut from one of the cards donated by a work colleague for my craft for charity project. I die cut it from the original card using an x-cut oval die. The image was originally just grey and white and looked a little like a pencil drawing, to give it a bit of a lift I used stickles iridescent glitter glue and highlighted certain areas. Once it was dry I attached it to the base panel using pin flair glue gel to make sure of a strong bond. 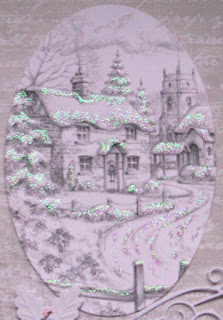 I then added the flourish cut using a Memory box die and the flowers cut using a Marianne die from scraps of white card. The netting is a piece of a chocolate coin bag that I had left over from Christmas, and the ribbon bow and gems were a freebie with a magazine I bought years ago and have been languishing in a drawer for years. The centre of the flowers were made by adding a snowflake sequin another freebie form a magazine purchase and by adding a gem to the centre. The little tag is from a pack I picked up in Lakeland a couple of years ago they are great for adding a little interesting touch to cards.

So I am off to do a bit more recycling see you all soon.

I am entering this card into the following challenges.