Recycle and help a Charity

Hi everyone the title of this post is the same as the header I used on a poster that I put in the kitchen and common room at work just before Christmas. Having spent the last 2 years challenging myself to complete first my certificate in papercraft and them My diploma in professional crafting I needed something new for 2013. So I asked colleagues to bring in old greetings cards wrapping paper, tags and ribbon and I have undertaken to make on average 100 cards per month for donation to various charities throughout the year. I couldn't have asked for a better response, work colleague have donated not just the Christmas cards they would normally throw away, but birthday cards, ribbon and various other bits and pieces I can use to meet my challenge.

Whilst the original plan was just to give the cards to charity shops in our local area to sell, I have been overwhelmed by the number of my colleagues who have asked that I take batches into work and they will buy them so that I can donate the money to local charities who don't have the luxury of a shop front to sell them in.

So having gone through all the cards and trimmed various, images, greetings, and verses from them to reuse (I now have a bag the size of a wheelie bin full of usable bits for crafting) I have also raided my stash for various free gifts of paper pads from magazines that can also be used and I have now started creating the cards.

Here is the first. 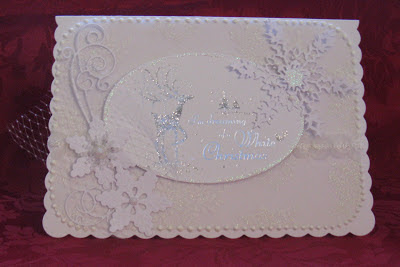 I cut the central image off the card using an x-cut oval die and used stickles iridescent glitter glue around the edge. Whilst that dried I cut a piece of glittered vellum paper to fit an A5 card blank and rounded the corners. I cut the large snowflake and flourish from plain white card using Memory box dies and the smaller snowflake flowers were cut using a Marianne die. 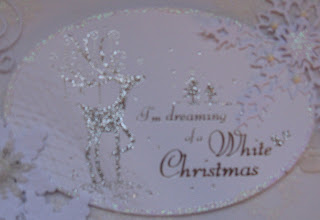 I stuck the vellum down using double sided tape in the centre so it woud be hidden by the oval panel and then used pinflair glue gel to add the panel to add depth. The flourishes and snowflakes were then added. The piece of net behind the flowers is actually part of one of those plastic net bags that chocolate coins come in at Christmas, which I had saved as I always scatter the coins on a table under a small Christmas tree every year for people to help themselves to during the festivities. 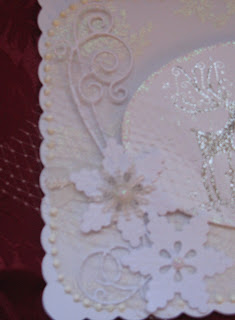 So that's the first one made I will regularly be updating my blog with my progress and will let you know how the charity donations go.

I am entering this card into the following challenges,

http://craftyhazelnutschristmaschallenge.blogspot.co.uk/  recycle something or use something that was free - the topper and the plastic net are both recycled.