Seventeen Down Seven to Go

It's Monday so its a new challenge at Through the Purple Haze. This week the challenge is Anything Goes. I was lucky enough to win the Lacy Sunshine Challenge a couple of weeks back so decided to use one of the digi stamps I chose as part of my prize for this challenge she is called Waverley and is part of the Sea Kissed Mermaids Collection. 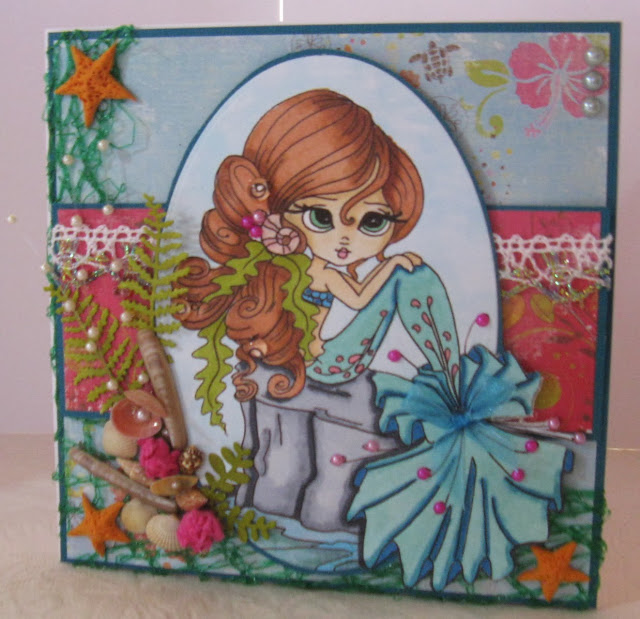 I had some lovely summery papers from fancy pants designs called Beach Babe and matted the pale turquoise paper onto a dark turquoise piece or core'dinations card stock, I draped a piece of green net cut from a bag that came from a local supermarket and once held tomatoes around the panel and then stuck it to a 6x6 card blank. I matted a strip of pink paper onto the dark turquoise card stock and wrapped some pretty glitter crotched lace around it before sticking it across the centre of the card.

I cut Waverley out using an out of the box technique I placed an oval x-cut die over the image and then marked two points either side of her tail that overlapped the die. I removed the die and fussy cut round her taik between the two pencil marks and then placed the die back over her making sure that the fussy cut portion of her tail was on the non cutting side of the die before putting her through the e-bosser. I mounted the die cut image onto more of the dark turquoise card stock and cut around the oval portion to leave a narrow border but left the tail free.I then added her over the centre of the pink panel.

I decided that flower embellishments would look out of place with a mermaid so used sea shells that I collect from a local beach with a couple of more tropical looking shells that were in a huge selection bag of really tiny shells I bought from Hobby craft. I think they were intended for flower arranging and putting in the bottom of vases to keep the flowers in place but they work really well on cards. I made my own pink coral by mixing white and red paper clay from Martha Stewart and rolling into little balls and then snipping across the top with my decoupage snips. The Seaweed was made using Tattered Lace leaf dies which had been cut from white paper and coloured using pear and moss pro-markers.
I also added some star-fish made by pressing paper clay into a Martha Stewart Silicone mould and then pricking the top of the stars with a pin.

I finished the design off by adding some pearl sprays, pearls inside some of the shells and adding pink pearls to her hair and tail. The final touch was three clear dew drops from Inky Impressions to look like water droplets in her hair.