Nine Down Fifteen to go 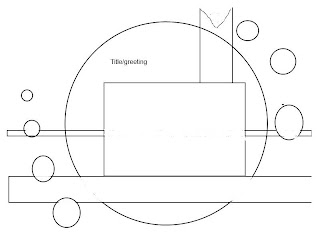 I decided to use it for the inspiration for a scrap book page of one of my memories from this years International Beatleweek in Liverpool. This years festival was very much focused on George Harrison both as a member of The Beatles and as a solo artist which suited me perfectly because he has and always will be my favourite Beatle, The Sunday of the festival is the convention day with guest speakers, a large sale room with all kinds of memorabilia both modern and vintage, and bands in several of the bars at the hotel that becomes our home for the week of the festival.

among the guests this year were some of the Devotees of the Hare Krsna Movement and they spent Sunday in a little side room away from all the usual Beatleweek madness, chanting chatting to anyone who dropped in and offering Indian sweet and savoury snacks to all those who stopped by. George is remembered with fondness by a number of the devotees and he offered support when they first came to England and started their chanting in Oxford Street he was often ridiculed for it but he found great inner strength and peace from the teachings of the devotees and in my experience they never seek to convert just to explain what they believe and it is down to the individual what they take from this. Anyway enough of the background  here is the layout that was inspired by my meeting with the Krsna devoytees that sunny Sunday in Liverpool. 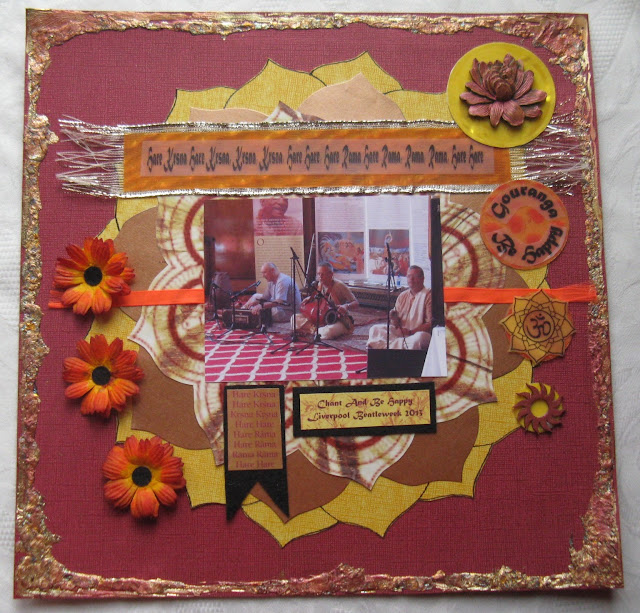 Rather than stick slavishly to the  sketch I used it to inspire this layout, and began by turning it through 180 degrees. I then used the main circular element to create a Mandala shape, the centre of which is based on an original Henna tattoo and I had one of these drawn on my foot at the festival. I scanned a photograph of the basic design and enlarged it and printed it on safmat. This was then stuck over a enlarged print of a piece of golden coloured Indian dupion silk and cut out. I then added the further layers to the Mandala using a copper metallic paper and yellow co-ordinations card from the retro 60's set.

I stuck the bright orange ribbon across the centre and added a photograph of three of the devotees. The small piece of bunting was cropped from the same photograph and is of the banner they carry when chanting in the streets that bears the words of the Hare Ksrna Mantra anyone over a certain age reading this will remember the stir it caused when the devotees from the London Temple took this into the hit parade in the late 1960's on the Beatles Apple record label and they all appeared on Top of The Pops. The cropped section of the photograph was added to a piece of black felt as was the title for the page 'Chant and Be Happy' which is the title of the book about Krsna that George wrote the forward to.

The whole piece was then stuck to a 12x12 piece of core'dinations card stock in deep red which I had gilded using gilding flakes at the edges. The ribbon across the top was frayed at the edges to give a softer feel to teh page and the central panel is the Hare Krsna mantra typed onto Safmat and stuck to bright orange illusion film before being stuck to the ribbon.

The row of four embellishments is from top to bottom a wooden element that I found in my local craft shop that bears a striking resemblance to the lotus flower which features prominently in paintings of Krsna in Indian Art. I gilded it using dark red gilding wax and mounted it on a die cut circle of bright yellow illusion film to match it into the colour scheme. the second element is a slogan that appears on badges that the devotees often give out and says Gouranga Be happy, the idea is that if you shout Gouranga loud enough you will feel joyous, again the slogan was printed onto safmat and added to a die cut circle of bright orange illusion film. The third element is an Om or Aum symbol and is used in meditation and is considered to be the perfect vibration of sound to bring about inner peace. Finally a small wooden sun was added and again this was gilded with red gilding wax - this for e represents George as he wrote 'Here Comes The Sun' and having seen him up close and spoken to him on a few occasions I always say he had a smile that lit up the world like sunshine.

On the left the final elements are to represent marigolds the flowers used in making the neck garlands worn by the devotees at special festivals. I didn't have any marigolds in my stash so coloured some white silk daisies with promarkers and added black felt centres.

this may not be exactly as the sketch appears but it is certainly heavily influenced by it and the colour scheme was chosen as a reflection of the Indian spices used in the preparation of the food we were offered that day.

Email ThisBlogThis!Share to TwitterShare to FacebookShare to Pinterest
Labels: Liverpool Beatleweek, through the purple haze challenges