Eleven Down Thirteen to go.

This weeks challenge at Through the Purple Haze is about song/book/film/cartoon. I chose a Beatles song as the title for this scrap book page, 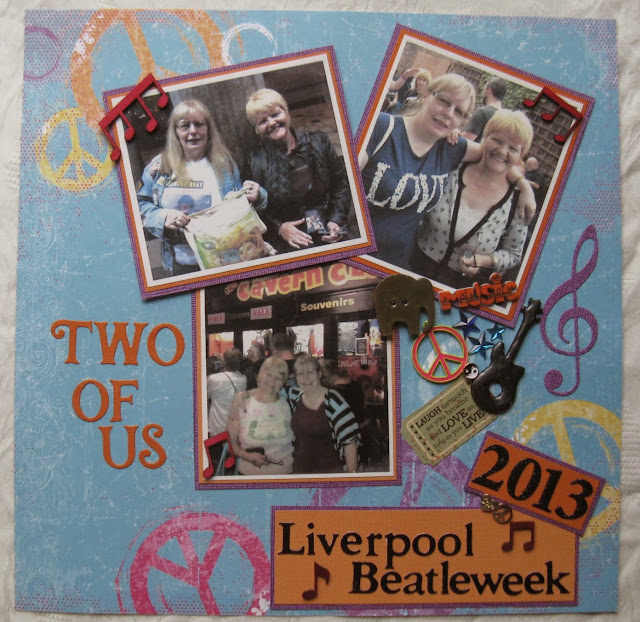 It is a random selection of photographs taken by three different photographers during Liverpool Beatleweek 2013. Diane and myself initially made contact as pen pals via a George Harrison Fanzine in 1998. Very soon we discovered that not only did we have an admiration of the Quiet One's music in common but we had grown up less than 20 miles apart and our Fathers had both worked at the same mine in the Nottinghamshire Coalfields. We even discovered that we used to drink in the same pub during the early 1980's although we never met. Our first meeting was in February 1999 and within minutes it was if we had known each other all our lives. We are still the best of friends and have shared the ups and downs over the years being there for each other to offer support and a shoulder to cry on or an ear to bend as required. We have shared a room together at every Beatleweek bar one since 2000. In 2012 I went to Beatleweek alone as Diane couldn't attend and if I had a pound for every time someone asked me 'Where's Di' I would never need to work again, although we have become so recognisable as 'Di and Alli' during Beatleweek that a few people did ask 'Where's Alli'.

The song about friendship and doing silly things seems perfect and it fits with the Beatles theme for the Scrap book I am putting together for Beatleweek 2013, as well as summing up our friendship over the years.

I had the backing paper which is from 'Little Yellow Bicycle' in my stash and it seemed to work for the Love and Peace philosophy of the fab's music.  I used bright orange in different shades to mount the photographs on and for the title and journalling panels to tie the design together and then added a bright purple matt behind the orange to fit in with the purple in the background paper. The eclectic mix of embellishments all have relevance to Beatleweek 2013 and the things we did. The musical symbols range from a die cut treble clef, wooden musical notes from kaisercrat that have been coloured with promarkers to pick up the colours of the peace symbols in the backing paper. the word music was a flat back from my stash and the guitar was an MDF element that I coloured using cosmic shimmer pearlescent PVA. The peace symbols, yin and yang and love symbols are all recycled ear rings. Some flat backed stars and an elephant button covered in glossy accents. The whole week is a celebration of music, peace and love, celebrating the coming together of different people and cultures under the umbrella of Beatles music. We all get very little sleep and see the stars when we gather in groups outside our base at the Adelphi hotel chatting. Finally Diane and I did something we have never done before at Beatleweek and probably will never do it again we stopped by the WWF stand in a local shopping centre and adopted an Indian Elephant each - hence the elephant button.