WOW with a touch of colour

I treated myself to a vagabond cutting machine this week and decided last night to have a play, I ended up with lots of white die cuts so decided on using them for a white on white background to show off one of the gorgeous digital stamps from the Sugar Nellie range. This lovely little lady is called Victoria and she is from the Simply Adorable range. 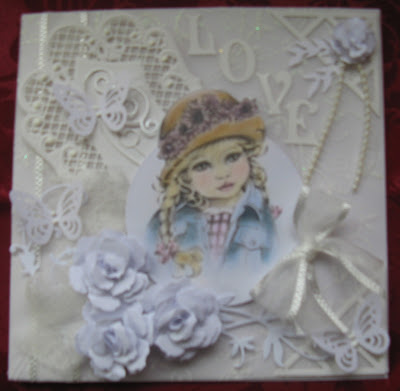 The back ground to the card is a pretty glittered velum which I wrapped around a tin piece of card so I could fasten it on the back and nothing would show through. I then wrapped a pretty white satin trimmed organza ribbon round the edge before fastening the panel to the front of an 8x8 card blank. I then layered up some of the die cuts from the test run of the vagabond using an Anja oval frame from Marianne, two corners trimmed from a trellis, and two different branch dies from Marianne. 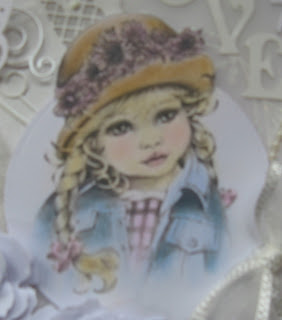 I coloured Victoria using chalks which were fixed using hairspray and the cut her out using a technique called out of the box I cut around her hat and then inserted a plain circle die behind this but over the rest of the image to cut her out.

Once she was in place I added some gauze and three roses that I had made from the medium flower on the Sizzix/Tim Holtz tattered flower die, which had just been cut from plain white paper. I added a smaller rose made from the small flower on the same die to the trellis in the top right corner and then added a ribbon bow, the word Love and some pearls and butterflies to finish.