A Little Bird told Us


One of my colleagues is leaving us to have a baby and I have been asked as the office 'Arty One' to come up with a leaving card for us all to sign. So after a bit of googling to find a digital stamp depicting an expectant mum I foud this delightful image called 'Precious Feeling' by  My Heart Pieces Digital Stamp, available at StitchyBear Digital Stamps.

I am still a bit of a learner when it comes to colouring but I felt that this image had just enough detail that it wasn't too plain, but also that it was simple enough for me to colour without too much trauma. 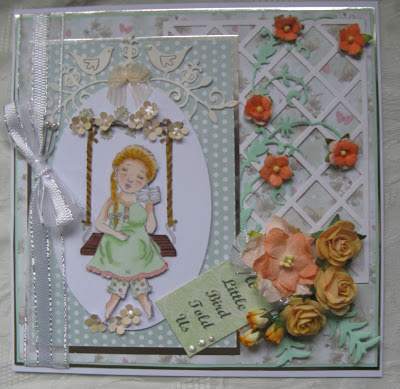 I didn't want to go down the route of pink or blue so went with soft green and peach for the colour scheme. The papers were some I had in my stash and were freebies from 'Making Cards' magazine.  I matted the main background paper onto thin green card and then onto silver mirror board. Th polka dot paper was matted onto silver mirror board. I cut the trellis using a Cheery Lynn die and the birds were cut using a crafty individuals die. The tag was just computer generated. from the off cuts of the thin green card I used as the mat for the main backing I cut two flowery flourishes using a Marianne die which I wound round the trellis before this was added to the card and I used the remainder of the green card to cut the fern leaves using a Kreative die.

I wasn't happy with the main part of the image the first time I coloured it so I coloured it again but I wasn't happy with the background on the second image so I fussy cut the second image from the background and mounted it over the first one using glue gel to add dimension and give a more 3D effect. I also punched out tiny flowers that I glued over the flowers on the image to add more dimension.

I then wrapped the panel with ribbon and then stuck it to an 8X8 base card. The final touches were the flowers on the trellis and the paper roses from Wild Orchid crafts. 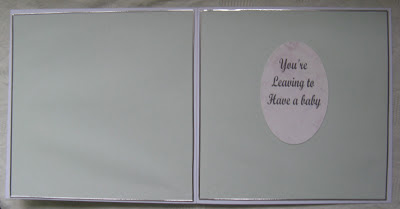 I left the inside fairly plain as there are a number of signatures to go on it when I take it into work tomorrow.

I am entering this into the following challenge