Hello everyone,
It has been a while since I blogged anything during the second half of 2016 I felt that my crafting mojo was slipping away and needed some new challenges. When I attended a Harry Potter event in August I made my own wand to take along and seeing some of the crafts there inspired me to take on making a full cosplay outfit for the next event it is still a work in progress but once finished it will be on display here. As a result of my husband telling our eldest grandson that I had made my own wand our little Slytherin decided that he would like one too. I decided that it would make a very special Christmas present to go with his Slytherin scarf from the Warner Brothers shop so I set about making one from him.

Having learnt by trial and error whilst making my own wand from a holly twig and paper clay I decided I needed something that was more robust and easier to model with. I chose to use Milliput a two part epoxy modelling medium.

I wanted to make it a bit special so I also bought a Papier Mache pencil box and a gauze bag everything else I had in the house from other projects, or in the case of the holly wood base for the wand in my garden.

I used a pencil sharpener to shape one end of the holly twig and let it dry out for a week before doing anything to it.

Once it was dry I used the Milli put mixed in accordance with the instructions and modelled the handle direct onto the twig. I used water to get a really smooth finish and took the milliput all the way down the twig and over the tip so it wasn't sharp.

Once it had dried I left it a couple of days sanded it painted it in various shades of brown acrylic and varnished it adding a green stone to the end.

The box I covered in some decopatch paper from my stash and lined it with a piece of satin from a fabric sample book. 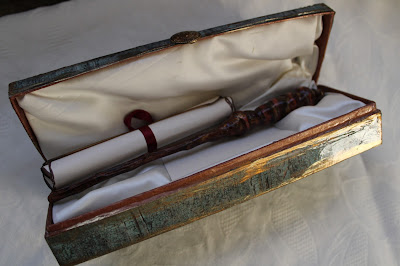 Once all the glue was dry I added the metal corners and varnished it with deco art water based varnish.

I used the computer to make the label and aged it using distress ink nd gilding wax before adding it to the lid and covering it in another coat of varnish. 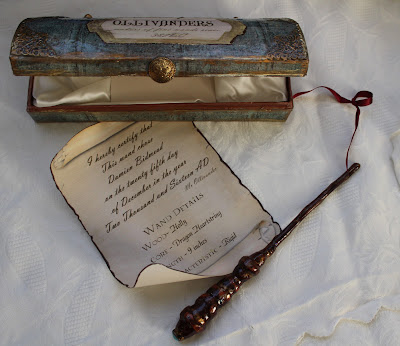 I printed the scroll giving the wand details and added my grandson's name explaining that the wand had chosen him on 25th December 2016. I also found a poster on Pinterest with all the wand movements and printed this off to fold in the box with the wand and scroll. 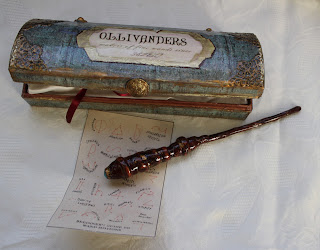 Finally I popped it in the bag and added the Wand chooses the Wizard tag. 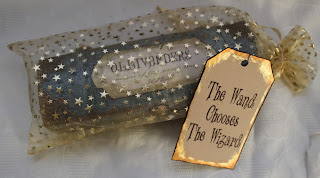 I really had fun doing this project and Damien loved it when he opened his presents on Christmas morning.