It's not every day you open a card to find a Beatle inside.

Bit of a different post from me today, I'm not posting a card I have made but one which has been made for me by a friend who won't mind me saying she is not card maker or paper crafter.

Today I celebrate the big 'five oh' and for a few weeks now all my friend Kirsten has been saying to me at work is 'wait 'til you see the card I've made you'. Well working nights Thursday and having a long weekend has worked out very nicely for once I am not working on my birthday, but the girls weren't about to let it pass without some sort of celebration. So on arriving at work on Thursday night I was greeted with a volley of party poppers and banners and balloons surrounding my desk.

Kirsten told me there were some cards and presents and insisted that I opened a small pink parcel first, explaining that was actually the card she had made for me. Well having carefully peeled the sticky tape off the paper (hey that will make at least 2 card backgrounds) I was confronted with a beautiful velvet covered box, with a row of satin roses along the top. 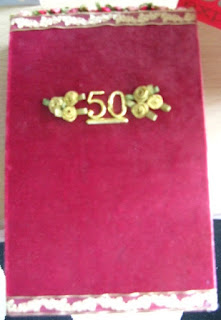 I was so busy admiring the box that it was a rather excited voice that bade me 'open it then'. I could never have imagined what awaited. All I will say is that Kirsten has managed to pack the things that make me me and have influenced or affected my life for the past 50 years into that box in such a way that I immediately burst into tears I was so overwhelmed by the trouble and care she had gone to. 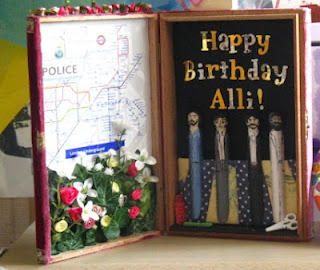 Let me explain - I work with Kirsten as a comms officer for the Police hence the crest at the top left, before that I worked in the Control Centre for London Underground - hence the map. I love my garden and when I moved into my current house I designed and with the help of my husband built an entire garden based around   another love of my life, The Beatles, which brings me onto the right hand side of the box. 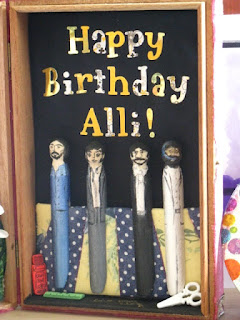 A patchwork zebra crossing and 4 dolly peg Beatles, recreating the famous Abbey Road cover, which as it happens is one of my favourite Beatles albums. Kirsten has over the years put up with me 'banging' on about the Beatles and I am known as the resident Beatlemaniac in the office. To finish off minature scissors, ruler and glue pot reflect my love of crafting.

Today I won't be crafting as my craft table is full of cards and flowers. 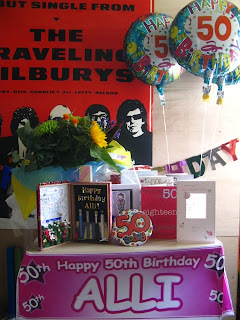 Tonight I will be off down 'The Cavern' with hubby to see my favourite Beatles tribute band perform, and teh fact that they are also friends makes it even better.

Once the cards come down I will be adding my beautiful keepsake from Kirsten to my Beatles display cabinet.

Kirsten has given me permission to photograph and post her work.

Thanks for reading I'm off to enjoy the rest of my first day as a 50 yr old and normal service will be resumed on my blog tomorrow because I will be posting details of the thank you card that I have made to take to work on Monday.