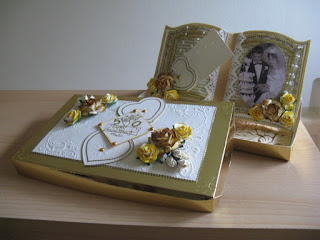 Earlier this year a work colleague and good friend told me that she needed a really special card for her parents Golden Wedding Anniversary in December. She wanted something different but something they would want to keep. I suggested a boxed card that included a photograph of her parents on their wedding day, which she thought was a lovely idea. Having visited the Creative Stitch and Craft show at Aintree in May   I had seen the Glitter Girls demonstrating their embossing boards and had treated myself to the bookatrix board and the box template board.

After a couple of false starts, due to me having the box embossing board upside down because I had tried to do it from memory. All else having failed I read the instructions and turned the board the correct way and found it was in fact incredibly easy to make the box. I decorated it using parchment that I had embossed using one of the Marianne designables folders through the sizzix and the hearts were cut using a x-cut aperture cutting and embossing folder. These were trimmed using pinflair flexible peeloffs and a sentiment was added on piece of pearlised ivory card. The golden pearls I made using pearl paint and by squeezing it onto a non stick craft mat I could get them all the same size once they were dry it was simply a matter of peeling them off the mat and attaching them using a dab of pinflair glue gel. The flowers were from Wild Orchid crafts. 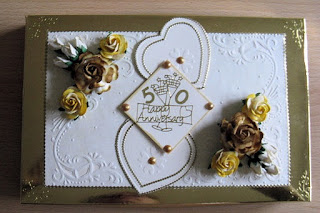 For the card I used pearlised ivory card stock as the base and various patterened papers for the pages each was edged using dew drops brilliance gold ink before being stuck down to form the book. I wrapped cream crotched lace ribbon around the spine and finished this with a piece of gold satin ribbon to cover the join.

My husband had been watching intently and pointed out that whilst the card was lovely there was no where to write on it, I over came this by using a heart the same as those on the box lid and stuck this over the corner of  an envelope which could then be stuck to the card to form a pocket, I used an off cut of cream hammered card trimmed to the correct size to slip inside the pocket which my friend can remove to add her greeting to her parents and then slip back inside. 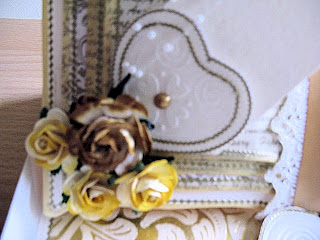 I again used flowers from Wild Orchid to decorate the corner, and also added a spray of pearls I had in my stash.

On the other side of the card I used a plain oval die cut from x-cut to cut out the wedding photo of my friends parents which I had printed from my computer. again flowers and pearls were added to balance the sides of the card. 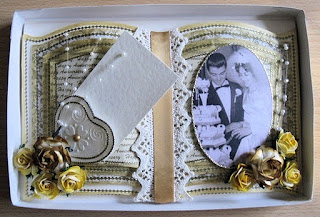 Whilst the finished card looked lovely lying flat in the box I wanted my friends parents to be able to display it to friends and family at their golden wedding celebration so I made an easel card base to the same size as the box and lines the inside with some lovely handmade golden paper from my stash and added a heart cut from cardboard as a stopper so the card could stand up for display. 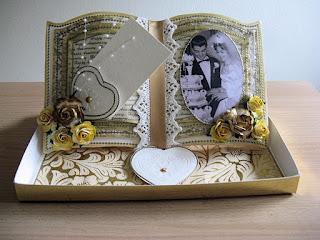 I really enjoyed making the card for my friend and I am keeping my fingers crossed that when she gives it to her parents at the end of the month they love it as much as she did when she saw it.

I have to admit having looked at these type of cards for a couple of years since I started making cards I had always considered them well beyond my capabilities and whilst it took a long time to make due to the number of layers and the amount of die cutting it really was quite straightforward and I'm planning my next one already.
Posted by Alli Devine at 20:06