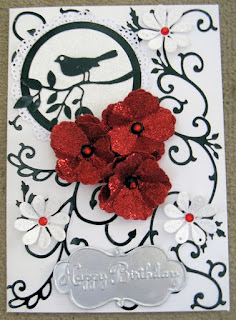 I usually avoid using glitter if possible as I do tend to get in an awful mess with it, no matter how carefully I protect the work area and work over a glitter tray I still end up with it in my hair and on my face. However on a recent sort through my stash I found some left over glitter paper from last Christmas and having recently added to my collection of Marianne dies I decided to give it a go.

I wanted to create a card without using patterned papers and using die cutting and embossing for the design. I decided to keep all other elements of the card black and white to really show off the deep red glitter paper.

It took about an hour to cut out all the pieces using a sizzix big shot. I started by cutting the bird and a circle from black gloss card using the Marianne bird on a branch die and the second largest Circle from my Nestabilities - plain circle set. As these were the biggest shapes to cut I placed them onto the card and using the leaves and flourishes from another set of Marianne dies I filled in around them to minimise waste. Having cut the first set of shapes I placed them to one side and cut further leaves and flourishes from the remaining card until I had used up all the card from a single piece of A4 sized card.

The flowers were then cut from the pieces of red glitter paper I had found in my stash I cut 6 pieces and pinched each individual petal between my thumb and fore finger to give them some dimension. I cut a circle from white glitter paper using the third largest circle from the Netsabilities set and cut three further flowers using a smaller Marrianne die from the off cuts.

The greeting was made by running a piece of satin art card through the sizzix using the happy birthday embossing folder from one of my sizzix sets.

Having cut all the pieces the fun could start. I used a sponge dabber to apply silver metallic ink to the Happy Birthday greeting to give it a metallic look and put this to one side to dry. Whilst that was drying I layered the white glitter circle onto the black circle and then edged the whole thing by pleating a strip that I had punched from plain photocopier paper using a Martha Stewart border punch, and sticking this to the back of the largest circle. Once this was done I used a thin layer of glue gel on the back of the bird to stick it to the white glitter circle and added a self adhesive crystal for the eye. I set this to one side to dry whilst I worked on the background.

Using a plain white card blank I started arranging the flourishes on the card without sticking them down until I had a pattern I was happy with. Some of the flourishes were trimmed to fit and the trimmings were added into the overall design to fill gaps. All the pieces were then stuck down using a quickie glue pen to ensure accurate placement of the adhesive and prevent it getting on the black face of the pieces.

Once all the background flourishes were stuck down I placed the bird panel at the top left and then used the flowers to cover some gaps in the flourishes. The red flowers were made of two layers held together with black brads that had then had red adhesive gems stuck to the centres and the white flowers were a single layer with a red gem centre. 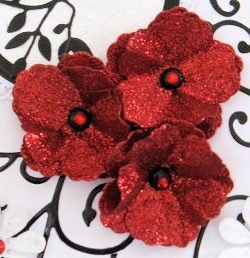 Finally I cut around the embossed sentiment and stuck this to the bottom of the card using blobs of glue gel to give a more 3D effect.

I am entering this card into the 'Lashings of Sparkle' challenge over at http://cinspirations.blogspot.com/

I still ended up with glitter in my hair and on my face but I really enjoyed putting this card together and am off to wash away the glitter.
Posted by Alli Devine at 16:06