To the beat of a different drum.

Having been concentrating on the distressed vintage and rather feminine looks recently, I was asked to design a card by a friend to give to a friend of hers who is a professional musician. I happen to know that he is a drummer and played with a rather well known band in the 70's so I had a flip through the Making Cards Men's special edition and found the image of a drum kit. I wanted strong masculine colours on the card so went with the pewter mirror card which I put through an embossing folder to get the musical score. I then used red and blue and matted and layered onto a black base card.

I also found an image of a record in the magazine and used this to form the centre of the happy birthday sentiment which is a peel off which I stuck to black card and added the record centre and then coated it in glossy accents to give the shiny finish.

The musical notes and treble cleft were from a selection of buttons which I stuck to silver die cut discs using glue gel before adding them to the card.

The border at the top was made by running the blue pearlised paper through my sizzix to get the borders and then overlapping them and sticking the strip of music across the centre to hide the join.

The logo on the drums was to make the card really personal to the recipient and was made by photographing one of my album covers and yes I do mean album cover rather than CD.

Whilst I usually struggle with men's cards despite having several to make every year my husband has three brothers for a start, I actually found this one almost designed itself. It also took me just over an hour to make from the initial idea to finished card.

All that remains is to post it to my friend so she has in time for the recipients birthday in late August. 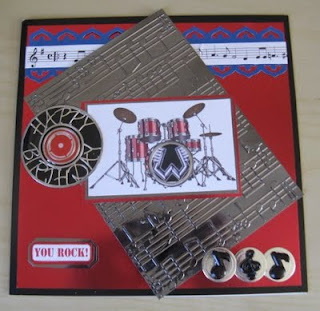 I have entered this card into the birthday challenge at http://pennyschallenges.blogspot.com/
Posted by Alli Devine at 17:53