Well what a busy few days it has been. Working nights Friday and Saturday, day off Sunday, then accompanying my hubby to hospital on Monday so he could have the torn tendons in his shoulder repaired. I thought I had it all under control until I got a message on Friday evening just before I left for work from a friend asking me to make a Fathers day card for her to give her dad.

On the surface no problem at all Fathers' day isn't until the 19th, then I read the rest of the message 'he's really into taekwando and he'll be taking his blue belt soon and he's 68 yrs old'. Now I know (because my husband keeps telling me) that I have a huge stash of card making goodies in various boxes and cupboards, but I was pretty sure I didn't have anything relating to taekwando.

However I have never been one to shirk a challenge and so having slept most of Saturday during the day I set to searching my boxes before I set off for work, I managed to find some vibrant metallic card and some lovely black mirri card that I brought at Inspirations a local craft superstore, along with a paper stack I have had for nearly 2 years and never used - I think it was one of the first I ever bought and the cover is long gone but I seem to remember it was a Papermania oriental designs one. I also found in my box of peeloffs some Chinese characters for Happiness, Prosperity and Harmony, which I though might come in useful.

On Sunday despite a busy night at work I arrived home raring to go. I googled 'taekwando' as I had no knowledge of what it was other than a martial art. I found that there was extensive use of the yin and yang symbol on the sites I browsed and this gave me the idea. I created a yin and yang out of bright red and blue metallic card  and used this as the background. A dragon from the paper stack was cut out and matted and layered on the same colours of metallic card. Then having had a good look at some if the positions used in taekwando drew and cut a silhouette from the black mirri card which I then mounted in front of the yin and yang. The finishing touches were provided using the Chinese characters and a sentiment I printed off the computer using wordart all of which had been mounted on cut off scraps of the black mirri card the whole design was then made up onto a black silk art card base from Inspirations. As I had used glue Gel to ensure a good bond it was left overnight to dry and is currently winging it's way to my friend I just hope she likes it.

I really enjoyed the challenge of coming up with the design. Let me know what you think as feedback is the best way to learn and improve. If there was one thing you would change about the card what would it be and I promise I won't be offended. 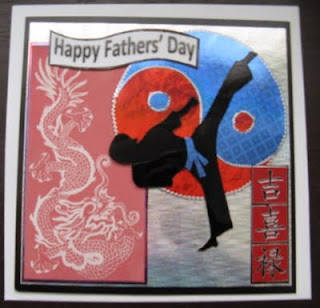