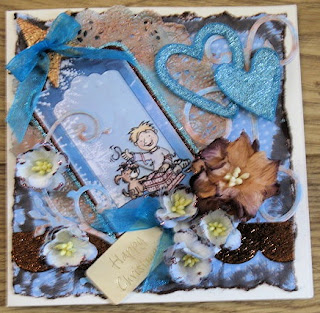 Well I am back to Christmas cards today and the one above is what I have come up with for this weeks challenge at Wild Orchid Crafts, use Brown and Blue  http://wildorchidchallenge.blogspot.com/.

I decided  to work on a 6x6" square so that I could ensure lots of overlapping layers to add interest to the card.

The light blue background paper and the image tag were printed off from the My Craft Studio Violet and Alfie's White Christmas CD ROM. I tore the edges of the backing paper and used a Memento ink pad in Cocoa to age the edges of the paper. This was then stuck down onto a cream card blank using double sided tape. The tag was then mounted onto brown and turquoise glitter papers from Craftime which I had been sent as a prize for having the star letter in the November issue of Making Cards magazine.

I used a paper doily from Wild Orchid Crafts which I coloured using a Tim Holtz distress ink pad in 'tumbled glass' and then dabbed copper metallic ink over this to give an aged look once the inks were dry the doily was stuck to the backing paper using double sided tape.

I had some left over flourishes from another project, which I had die cut using a Marianne die and the sizzix big shot. These were in plain white card and I used the 'tumbled glass' and copper inks with a small sponge dabber to colour these. I stuck the larger of the two flourishes to the right hand side of the card and added the  glitter border (also from my craftime prize) across the bottom of the card.

I then added the tag at an angle before adding the second flourish allowing the edges to overlap the side of the tag.

Once I had the basic design on the card I then set to work with the embellishments. The star at the top left was recycled from some Christmas packaging and again I coloured it with the copper metallic ink to give it a more brown appearance. I used some bright blue organza ribbon from my stash and tied a small bow which I stuck to the centre of the star. The hearts at the top right were again from the craft time prize and I coated them with a liberal amount of stickles glitter glue in bright blue once they had been added to the card.

The flowers are small blue gardenias from wild orchid with the addition of one large brown gardenia from their collection. all the flowers had a very fine line of PVA added to the edges of the petals before being dipped in a brown glitter. I then arranged the flowers on the card until I was happy with the composition and then stuck them down using glue gel.

The finishing touch was another bright blue bow and a small greeting tag pushed into the arrangement at an angle.

I really enjoyed working on this card as brown and blue is one of my favourite colour combinations and it makes a change from the traditional red and green of Christmas. I still have some of the backing paper left over and have already printed another tag to use as the image for my next card.
Posted by Alli Devine at 14:03